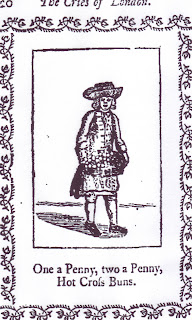 It is Good Friday today according to the Christian calendar, and the day when it is traditional to eat hot cross buns. Although the phrase ‘cross buns’ was first recorded in 1733, the tradition appears to have very ancient roots. ‘Bread’ in one form or another has played an important symbolic role in all cultures in which grain is a staple (as does rice in Eastern cultures), and it seems that bread marked with a cross-like symbol may go back a very long way indeed – perhaps to Ancient Greece or Ancient Egypt. The original ‘cross’ may in fact have represented the crossed horns of an ox – a traditional sacrifice in many times and places.

Today I want to consider when ‘cross buns’ became ‘hot’. I don’t know for sure (another project!), but it was certainly well and truly established by the mid-nineteenth century. Henry Mayhew, in his amazing social study London Labour and the London Poor: A Cyclopaedia of the Condition and Earnings of Those that Will Work Those that Cannot Work, Those that Will Not Work described the street sellers of Hot Cross Buns in 1851.

“The sellers of the Good Friday buns are principally boys, and they are of mixed classes — costers' boys, boys habitually and boys occasionally street-sellers, and boys street-sellers for that occasion only. One great inducement to embark in the trade is the hope of raising a little money for the Greenwich Fair of the following Monday. I am informed that 500 persons are employed on Good Friday in the streets of in the sale of hot-cross buns, each itinerant selling upon the day's average six dozen halfpenny, and seven dozen penny buns, for which he will take 12s. 6d. (his profits being 3d. in the shilling or 3s. I½ d.). One person informed me that last Good Friday he had sold during the day forty dozen penny buns, for which he received 50s. The bun-selling itinerants derive their supplies principally from the wholesale pastrycooks, and, in a less degree, from the small bakers and pastrycooks, who work more for "the trade" than themselves. … The itinerants carry their baskets slung on their arm, or borne upon the head. A flannel or green baize is placed at the bottom of the basket and brought over the buns, after which a white cloth is spread over the top of the baize, to give it a clean appearance. A vendor of " hof-cross buns " has to provide himself with a basket, a flannel (to keep the buns warm), and a cloth, to give a clean appearance to his commodities.”

Last year on this day I gave you a recipe for Hot Cross Buns from the good old reliable Cassell’s Dictionary of Cookery (1870’s). Here is an alternative recipe from the same book.

Good Friday Buns.
(commonly called Hot Cross Buns)
Rub a quarter of a pound of butter into two pounds of flour. Add a pinch of salt; then mix a wine-glassful of fresh, thick yeast with a pint and a half of warmed milk, and stir these into the flour till it forms a light batter. Put the batter in a warm place to rise. When sufficiently risen, work into it half a pound of sugar, half a pound of currants, half a nutmeg, grated, and a quarter of an ounce of powdered mace. Knead these well into the dough, making it up into buns, and place them on buttered baking tins. Make a cross on them with the back of a knife, brush a little clarified butter over the top, and let them stand a quarter of an hour before the fire. Bake in a good oven.

The best part of Easter is eating your children’s candy while they are sleeping, and then trying to convince them in the morning that the Easter rabbit came with one ear. Anna Quindlen.

How lovely to be both charmed and well-informed by your posts - always such a treat!

My dear spouse adores hot cross buns, now that I think of it, and it has been years since I made him some - perhaps I will try one of your recipes.