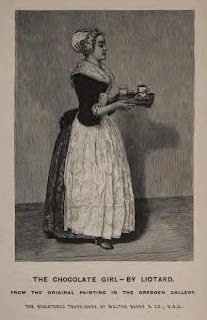 I have become interested recently in the evolution of ‘single ingredient’ cookery books. It was the Chocolate Parfait Amour recipe from the other day that got me thinking about the phenomenon. The source book - Cocoa and Chocolate: a short history of their production and use was published by the chocolate-making company Walter Baker and Co. in 1886 (the company that gave America ‘German Chocolate Cake’ – thanks to a typo. It should have been ‘German’s Chocolate Cake’ after the employee who developed the recipe, but that is another story.) This book must surely be one of the earliest examples of an advertising cookery book?

Numerous books of the nineteenth century contain recipe chapters – such as A Treatise on the Management of Fresh-water Fish, with a view to making them a source of profit to landed proprietors, published in 1841 by Gottlieb Boccius, which has ‘twenty three German recipes’. I do not count these however, as the recipes are not their main focus. The best I have been able to uncover so far (so many projects, so few hours in the day) are books on cooking apples (1865) and potatoes (1870), and I will give you some ideas from these books soon.

Please join in the search for early examples of this sort of cookery book – it promises to be quite good fun. I will feature them from time to time, as I (we) find them. For today, I will go again to the Baker Company’s chocolate recipe book, from which I have chosen a few interesting beverages.

Chocolate Syrup for Soda Water
Baker's chocolate (plain), four ounces; boiling water, four ounces ; water, twenty- eight ounces ; sugar, thirty ounces; extract of vanilla, one-half ounce. Cut the chocolate into small pieces, then add the boiling water, and stir briskly until the mixture forms into a thick paste, and assumes asmooth and uniform appearance; then slowly add the remainder of the water, stirring at the same time, and set aside until cold. After cooling thoroughly, a layer of solid grease, forms over the surface, which is to be carefully removed by skimming. After this is completed add the sugar, dissolved by the aid of a gentle heat, and allow the whole to come to a boil. Then strain and add the extract of vanilla. This forms a syrup which is perfect. It possesses the pure, rich flavor of the chocolate without the unpleasant taste.


Wine Chocolate.
Set half a bottle of good white wine, three ounces of chocolate, and one ounce of powdered sugar over the fire; beat the yolks of four eggs to foam, with a little wine, and add it to the chocolate as soon as it begins to simmer; stir it for a few minutes, then take it from the fire and serve. This is an excellent winter beverage.

Chocolate Wine.
Infuse in a bottle of Madeira, Marsala or raisin wine four ounces of chocolate, andsugar if required. In three or four days strain and bottle.

I can recommend switching to chocolate for all you addictive types. .. . Think of the advantages. … Chocolate doesn't make you stupid and clumsy. It doesn't render you incapable of operating heavy machinery. …You don't have to smuggle chocolate across the border. ...Possession, even possession with intent to sell, is perfectly legal. … and second-hand chocolate doesn't offend the people around you.
Linda Henley, American Columnist.
Posted by The Old Foodie at 5:00 AM

As a wine expert one of the food and wine pairing challenges is matching chocolate and wine. Have you tried this wine chocolate? I suppose you'd make it with a sweet wine like a muscat maybe?

Hello Heiko - I am not a wine-pairing expert by any means, but I would think that it depends on the type of chocolate: a sweet sticky chocolate mousse or fudgy cake with a sweet white, but a square or two of very very dark chocolate would surely go well with a rich red. I have some very dark chocolate with raspberries at present (Lindt) - would go well with a fruity red?
As for the recipe for wine chocolate, I think I would make it first with a muscat or something similar, and experiment from there.

"This forms a syrup which is perfect. It possesses the pure, rich flavor of the chocolate without the unpleasant taste."

Yet another example of how tastes change. Sure, bakers chocolate isn't *wonderful* chocolate by any stretch of the imagination, but I wouldn't say it has an unpleasant taste.