Stirring up the Pudding. 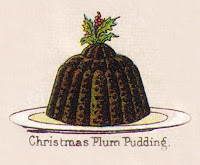 Yesterday was ‘Stir Up Sunday’, the traditional day to make your Christmas pudding. Did you mix yours? For some of you, in the other half of the world, it may still be Sunday when you read this, so you still have time.

The ‘tradition’ is a nice example of the association of ideas. According to the Anglican Church calendar, yesterday was the last Sunday before the season of Advent. The day became popularly known as ‘Stir-Up Sunday’ because of the opening words of the opening prayer of the day (which date from the sixteenth century):

Stir up, we beseech thee, O Lord, the wills of thy faithful people; that they, plenteously bringing forth the fruit of good works, may of thee be plenteously rewarded; through Jesus Christ our Lord. Amen.

These words also happened to be a timely reminder to the housewives and families that the preparations for the Christmas feasting should be gotten underway, if they weren’t already. Children would skip happily home from church singing their own, very secular, interpretation of the concept:

Stir up, we beseech thee, the pudding in the pot;
And when we get home we'll eat the lot.

It became the tradition to ‘stir up’ the pudding later in the day – all family members taking their turn, and making a wish as they stirred.

The keeping qualities of plum puddings were a great advantage in early times when there were few food-preserving alternatives. Plum puddings were not just served at Christmas, but were a stand-by for all important dinners and gatherings. An efficient Mistress of a reasonably well-to-do household would always have the makings in the pantry, and perhaps several actual prepared puddings.

I don’t think Pudding Emergencies are high on our list of potential household dramas or embarrassments today, but at least one nineteenth century cookbook writer considered a ready supply of plum puddings to be a good contingency plan.

CHRISTMAS PUDDING.
One pound of bread crumbs, rubbed through the colander; half a pound of flour; one pound and a quarter of suet very finely chopped; quarter pound of sugar; one pound of currants; half pound of rasins, stoned and chopped. Mix well together, and then add - two ounces candied citron; one ounce ditto orange-peel; one ditto lemon peel; one nutmeg, grated; a little mace, cinnamon, and three cloves pounded; quarter of a tea-spoonful of powdered ginger; the peel of one lemon finely chopped. Mix well again, and then add - one wine-glassful of brandy; one ditto white wine; the juice of one lemon. Mix well together, and then stir in gradually six well-beaten eggs. Boil five hours, and sift sugar over the top when served.

It is exceedingly convenient when making Christmas pudding, to boil several at once in various sized moulds or basins, as they will keep well for a month or six weeks, and can be served on an emergency by merely re-boiling them - say one hour for a pint basin. After the first boiling remove the cloth, and when the pudding is cold cover it with a dry clean cloth.


[The housekeeper's book: comprising advice on the conduct of household ...by Frances Harriet Green, 1837]

I think we have a new addition to the Vintage Christmas Recipes archive!

There is a remarkable breakdown of taste and intelligence at Christmastime. Mature, responsible grown men wear neckties made of holly leaves and drink alcoholic beverages with raw egg yolks and cottage cheese in them.”
P.J. O'Rourke
Posted by The Old Foodie at 6:04 AM

Isn't there supposed to be a gold coin or a penny stirred in to the batter also? (I could be thinking of something else . . .)

Love the illustration by the way. We just had a season's 'winner' on our US TV show 'Project Runway'(reality show on fashion designers) and I swear she must have used that pudding illustration as inspiration for her hats.

I don't have a very high opinion of PJ O'Rourke anyway, so his belief that there is cottage cheese in eggnog shouldn't surprise me.

Hello Everyone:
Karen - special charms or coins are put in the pudding, not the cake.
Shay and M - I am not sure that there really is cottage cheese in any drink, I think that is just PJ being humorous.

I have been following your blog since I "stumbled onto it" last year. I discovered the Christmas recipes and had a great time reading everything!
I don't believe that I have never made a comment but today I had to do it! I wanted to tell you that I saw your interview in Fine Cooking! When I started to read it last night I realized that it was you and just had to congratulate you on your fine work!