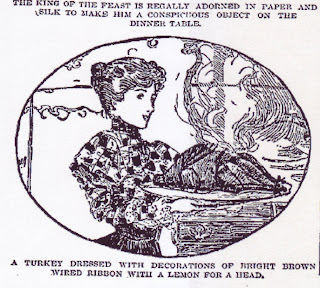 I wish you, for your Thanksgiving turkey, one such as that eulogised by the American writer and humorist Irvin S Cobb (1876-1944) in Cobb’s Bill of Fare (1913).

First, he describes a turkey served at a large restaurant for a Thanksgiving feast – an ‘ancient and shabby ruin’ of a turkey, ‘full of mysterious laboratory products and … varnished over with a waterproof glaze or shellac, which rendered it durable without making it edible.

Then he tells it how a Thanksgiving turkey should be (and this is the one I wish for those of you celebrating the day):

“But there was a kind of turkey that they used to serve in those parts [‘up North’] on high state occasions. It was a turkey that in his younger days ranged wild in the woods and ate the mast. At the frosted coming of the fall they penned him up and fed him grain to put an edge of fat on his lean; and then fate descended upon him and he died the ordained death of his kind. But oh! the glorious resurrection when he reached the table! You sat with weapons poised and ready – a knife in the right hands, a fork in the left and a spoon handy – and looked upon him and watered at the mouth until you had riparian rights.
His breast had the vast brown fullness that you see in pictures of old Flemish friars. His legs were like rounded columns and undadorned, moreover, with those superfluous paper frills; and his tail was half as big as your hand and it protruded grandly, like the rudder of a treasure-ship, and had flanges of sizzled richness on it. Here was no pindling fowl that had taken the veil and lived a cloistered life; here was no wiredrawn and trained-down cross-country turkey, but a lusty giant of a bird that would have been a cassowary, probably, or an emu, if he had lived, his bosom a white mountain of lusciousness, his interior a Golconda and not a Golgotha. At the touch of steel his skin crinkled delicately and fell away; his tissues flaked off in tender strips; and from him arose a bouquet of smells more varied and more delectable than anything ever turned out by the justly celebrated Islands of Spice. It was a sin to cut him up and a crime to leave him be.
He had not been stuffed by a taxidermist or a curio collector, but by the master hand off one of those natural-born home cooks – stuffed with corn bread dressing that had oysters or chestnuts or pecans stirred into it until it was a veritable mine of goodness, and this stuffing had caught up and retained all the delectable drippings and essences of his being, and his flesh had the savor of the things upon which he had lived – the sweet acorns and beechnuts of the woods, the buttery goobers of the plowed furrows, the shattered corn of the horse yard.
Nor was he a turkey to be eaten by the mere slice. At least, nobody ever did eat him that way – you ate him by rods, poles, and perches, by townships and by sections – ate him from his neck to his hocks and back again, from his throat latch to his crupper, from centre to circumference, and from pit to dome, finding something better all the time; and when his frame was mainly denuded and loomed upon the platter like a scaffolding, you dug into his cadaver and found there small hidden joys and titbits.
You ate until the pressure of your waistband stopped your watch and your vest flew open like an engine-house door and your stomach was pushing you over on your back and sitting on you, and then you half closed your eyes and dreamed of cold-sliced turkey for supper, turkey hash for breakfast the next morning, and turkey soup made of his carcass later on. For each state of that turkey would be greater than the last.
There must still be such turkeys as this one somewhere. Somewhere in this broad and favoured land, untainted by notions of foreign cookery and unvisited by New York and Philadelphia people who insist on calling the waiter garçon, when his name is Gabe or Roscoe, there must be spots where a turkey is a turkey and not a cold-storage corpse. And this being the case, why don’t those places advertise, so that by the hundreds and thousands men who live in hotels might come from all over in the fall of the year and just naturally eat themselves to death?

And for the recipe for the day, a fine dressing.

Quotation for the Day.
May your stuffing be tasty
May your turkey plump,
May your potatoes and gravy
Have nary a lump.
May your yams be delicious
And your pies take the prize,
And may your Thanksgiving dinner
Stay off your thighs!
Anonymous.

That's quite an amazing speech. Where do you find all of these references? :)