Thanksgiving Ideas for the Bride Housewife. 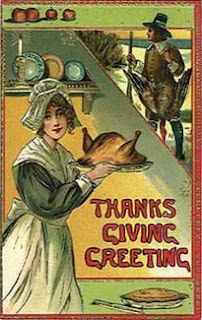 Thanksgiving is approaching over the Big Water, and I promised my American friends some historic menus and recipes. Those of you who are clearly on the wrong side of the Big Water need not worry, there are ideas aplenty for all of us amongst these gems.

I understand that the main delight (or not) of Thankgiving Day is to gather together as many family members as possible in order to enjoy (or not) a feeding experience and level of jollity similar to that of Christmas. I also understand that the household disruption, cooking, entertaining and cleaning up required by this event is somewhere on the scale between awesome and impossible. It may have been an easier task for our forebears, familiar as they were with much larger families living in much smaller communities, often with domestic help, and mercifully free of television and its celebrity chef standards.

Once upon a time a two-person household was a rare thing – a temporary circumstance until the new bride dutifully fulfilled her role and became a mother of many. The little advice that was around to help her cope with this hopefully very temporary state might be of particular interest today to modern cooks wishing to recreate historic recipes – often a frustrating task given the sheer quantities of ingredients involved.

Mrs. Wilson’s Cook Book, 1920, published in 1920 in the USA, noted the particular problem faced by the new wife at Thankgiving.

“The bride housewife who is planning a Thanksgiving dinner for “just the two” frequently finds herself in a dilemma. Turkey is much too large for her and chicken hardly appeals to her for this day.”

Mrs Wilson gave three “suggestive” menus for a Thanksgiving dinner for two. This one is my pick:


Pastry for Two.
Place in a mixing bowl
One cup of flour
One teaspoon of baking powder
One-half teaspoon of salt
Sift to mix, then rub in three tablespoons of shortening and mix to a dough with three tablespoons of water. Chop the water into the flour, then turn on the pastry board and roll out one-quarter inch thick. Use for tarts and turnovers. Brush with milk or syrup and water and bake in a moderate oven.


Cake for Two.
Place in a mixing bowl
Three-quarters cup of white corn syrup,
Yolk of one egg,
Four tablespoons of water,
1 cup of sifted flour,
Three level teaspoons of baking powder,
One level teaspoon of flavoring.
Beat to mix thoroughly and then add two tablespoons of melted shortening, folding in carefully. When thoroughly mixed, cut and fold the white of an egg into the dough.Turn into a well-greased and floured pan which has a tube in the centre and bake in a moderate oven for twenty-five minutes.

Thanksgiving dinners take eighteen hours to prepare. They are consumed in twelve minutes. Half-times take twelve minutes. This is not coincidence.
Erma Bombeck.
Posted by The Old Foodie at 5:00 AM

Are you sure all the ingredients are listed in the "cake for two"? It looks like flavored corn syrup. I don't see anything of substance (like flour, bread crumbs, or nuts) included.

Actually, that's one menu you could really just translate straight to table, and perfect for two, regardless of which side of the water you are!

OOPS! Thanks Sandra - 1 cup of flour added. Cant blame the proof-reader, 'cos its me.
Helen - you are right, it is not a bad menu, overall, is it?

I was going to say the same thing about the menu. I don't much like turkey, and in a small household it is nearly impossible to use a whole bird without freezing it and going after it a bit at a time; I don't think it freezes that well, either. Duckling, on the other hand -- ohhh, yes. I would even go to Chinatown and get a tea-smoked duck and save myself the scrubbing of the roaster, but I'm lazy.