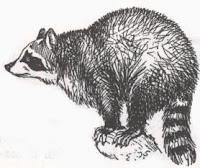 On this night in 1897, somewhere in the United States of America at an establishment called Bugbee House, a group of men (we can safely presume that the guests were all men, cant we?) sat down to a ‘Coon Supper’.

The menu was as follows:

There was a Bugbee House in Putnam, Connecticut (and Eastwood and Jericho are in the same state) – Thomas Bugbee was a prominent businessmand and hotelier in that town. A Mr. Orrin Morse was the president of a manufacturing company in Putnam in the late nineteenth century, so perhaps he was hosting the dinner, or alternatively he was being honored in some way?

My own best guess, on a topic I know absolutely nothing about, is that most ‘coon was (is) cooked over a campfire, not in a restaurant. Certainly there is a dearth of recipes for it in conventional cookery books, even those of a certain age. To find out how to prepare, cook, and enjoy raccoon therefore, we must go to one of the huntin’ shootin’ fishin’ types. Alonzo Delano gives the instructions in his book Life on the Plains and Amongst the Diggings … (1857) – although please note, he does not give an accompanying sauce.

"First catch your coon and kill him, skin him, and take out the entrails; cut off his head, which throw away; then if you have water to spare, wash the carcass clean, but if you have not, omit the washing. Parboil an hour to take out the strong musk, then roast it before the fire on a stick. While it is roasting, walk ten miles, fasting, to get an appetite, then tear it to pieces with your fingers, and it will relish admirably with a little salt and pepper, if you happen to have them. A tin cup of coffee without milk, taken with it, makes, under the circumstances, a feast fit for the gods".


A mere few minutes after posting this, I received an email from Gary Allen - and I thought you would enjoy it.


Once, some 30 years ago, when I was young and new to hunting, I found I had an opportunity to shoot a plump raccoon. It was a long and tricky shot, so I was pretty proud of my trophy.

I planned to make a feast of the beast, so I took it home, skinned and dressed (or rather, un-dressed, it -- I wonder why removing an animal's skin came to be considered as "dressing?") it on our kitchen

table. I was rather surprised --  'though, in retrospect, I don't know why -- at how much fat there was. After trimming away most of it, the raccoon didn't have nearly as much meat as I had hoped. Little did I know that the limited supply of meat was a GOOD thing.

After cooking it for some time, we dug in to our first taste of wild raccoon.

Why specify "wild?" No one in his right mind would try to farm-raise raccoons.

First of all, they're a nasty brutish bunch who would, no doubt, prefer to eat their handlers -- or would if they did no so much despise us.

Second, when not thinking about eating US, they would much prefer to eat our food. Or our garbage. Either way, raccoons have an innate ability to make a mess of anything we hold dear. Inviting them to be

a part of our lives is just stupid. It reveals an over-weaning lack of foresight.

Third, it's one thing to raise an animal that prefers to eat as we do (pigs, for example), when the food we get in return is worth it. Few would argue that trading excess corn for bacon and pork chops is a

bad idea. It's quite another to convert perfectly good food into raccoon flesh.

Raccoon, as least the one I ate, tasted like very old and stringy beef -- perhaps the dessicated flesh of some super-annuated ox, an over-worked creature who might very well have expired in mid-furrow.

Aside from the poor quality of the meat, a certain amount of residual fat remained, despite my earlier efforts to remove it. This fat had the remarkable property of not melting in the mouth -- so that, after

eating the raccoon, I was convinced that someone had coated the inside of my mouth with tallow, or possibly axle-grease.

Needless to say, the tribe of raccoons has been safe from my predations during the past three decades. I have not yet had, nor do I expect anytime soon to have, an urge to experience another bout of ring-tailed dyspepsia.

There is a passion for hunting something deeply implanted in the human breast.
Charles Dickens (1812-1870), in Oliver Twist.

http://muzzleloadermag.infopop.cc/eve/forums/a/tpc/f/706104309/m/7791084502 It would seem that in Dan'l Boone And Davy Croclett days the coon fat was one of the things you were shooting it for-- not to eat, but to render down and use for things like keeping leather soft, controling dry, unruly hair, and greasing home=made bulletts. Since nobody uses it for this anymore, except perhaps sone die hard black powder re-enacters, most of a modern coon kill would go directly to "waste'. Squirrel is still made into stew or burgo-- country squireels only, urban ones are apt to be diseased. People who hunt bear do it for trophies, or because they consider bears, or a particular bear, dangerous. Many bears, who often eat garbage, havew trichinosis. We rarely consider the non-eating uses of killled game now-a-days, but once they were quite important.

I wonder if the raccoon's high fat content made it a highly desirable foodstuff in a pioneer world where other forms of fat and protein were hard to get; and where the incessant labor required just to survive burned calories at a rate a stairclimber would envy.

Hi Shay - you are probably right, and 'coon was also free food (if you could catch it!)

Raccoons actually make wonderful pets. I had one for a summer as a child. They're sweet-natured, curious, and a lot of fun. I'm told this changes as they get older, but Charlie was always affectionate. He loved trying to wash fruit loops, (a type of sweet American breakfast cereal) though they would always dissolve in the water.

If the link works, this is a picture of me with Charlie Critter.

Delano's comment that for raccoon to seem tasty you should walk ten miles, fasting, while waiting for your coon to cook backs up Gary's beautifully crafted report.

Raccoon is WONDERFUL...if you really know how to cook it.
My Grandmother told me that growing up in rural Ohio...(agricultural area) She ate coon every year for Thanksgiving Dinner instead of having turkey. She explained that raccoons living in a agricultural area usually feed on corn or fallen apples from orchards. They are clean and taste great.
The trick is knowing how to cook them!
First, after the animal is dressed/skinned and cleaned you need to cut away as much of the fat as possible. (They have a pretty good layer of fat too.)
Next you need to place the meat into a large roasting pan and cover it with water. Bring to a boil and maintain this boil for 10 -12 minutes. Pour off the water and fill the roasting pan with water again for a second 10 - 12 minute continuous boil. Pour off the water and then add the vegetables and seasonings of your choice. Place the covered roaster into the oven and cook for 3 hours at 335 degrees.
The meat will practically fall off of the bones. It is very tender and rich, dark meat.
If you cook it like this you will think the flavor is like the best roast beef you have ever eaten. The texture is similar to very tender dark turkey meat.
Our family just finished eating a big meal of a nice big raccoon.
It turned out AWESOME!
Save all that fat you cut off.
The fat can be rendered to make some of the finest soap that you can produce at home.
If you know how to cook a coon...you will want one every Thanksgiving...Just like my sweet little Grandmother.
Enjoy!