What Salad Is That? 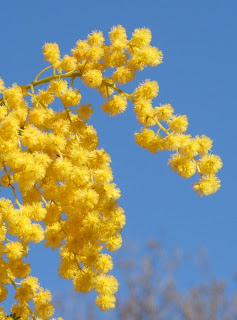 The iconic wattle is blossoming out in all its madly yellow, pom-pommy, headily fragrant, sneeze-inducing glory in SE Queensland at present – so I am of a mind to give you a salad recipe named in its honour. Wattle Salad, you say, What is that?

It is Mimosa Salad, of course. The mimosa and the wattle are one and the same thing as far as this non-botanist can ascertain. The tree apparently got its local name sometime in the early days of this far-flung reach of the Empire – at a time and place when pragmatism ruled over perfume and colour. The long pliant branches of the indigenous Acacia species were found to be ideal for making – you guessed it – ‘wattle and daub’ fences and huts. I much prefer the name ‘mimosa’ – it sounds sweet and slightly exotic and definitely fragrant, doesn’t it?.

A Mimosa Salad is about as simple as you can get, for a salad. I don’t know who first garnished some lettuce leaves with the fluffy yellow stuff that results when you rub hard-boiled eggs through a sieve, but for a short while it was a classy classic. The salad got an honourable mention in a blog post several years ago, but I did not give you a recipe. The omission is addressed below with a recipe from Royal Menus, the book written by Rene Roussin, the Chef de Cuisine to King George VI (king from 1936-1952).


Salade Mimosa.
Make a salad dressing by mixing two parts of olive oil with one part wine vinegar and adding a little chopped parsley, chervil, chive and tarragon. Stir a tablespoonful of raw cream into every gill of dressing.
Dress the small yellow leaves from the hearts of fresh lettuces with the mixture given above. Pass 1 or 2 hard-boiled eggs – yolk and white together – through a fine sieve and scatter on top of the lettuce.

P.S. If you really want to celebrate the wattle/mimosa, there was a Mimosa Cocktail in a previous post.

For most of my life I was convinced that Monty Python had made up the wattle, but then I found I really incredibly delicious beer made from some form of it. I have never been so happy about the existence of Australia as at that moment.

Hmmmm. Wattle beer. Must try and track it down. I presume it was made from wattle seeds - that the name was not simply a gimmick name?

Yes, wattle seeds. I believe they were of the black wattle. The most amazing feature of the beer was that is tasted good with everything...even ice cream!

Here is a review of it:
http://www.beerguide.com.au/beer-reviews/Barons-Brewing-Company/Black-Wattle-Superior-Wattle-Seed-Ale