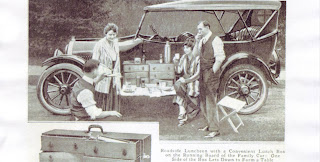 Today is the anniversary of the arrival in San Francisco of Alice Huyler Ramsey (1887-1983), fifty-nine days after she set off from New York in 1909. She was the first woman to drive across the entire North American subcontinent – and she did it at a time when very few men could drive (because the automobile was a rare novelty), and a full decade before women got the vote.

Alice performed the feat as a publicity stunt for the company that made the car she travelled in – a green, 30 HP, four-cylinder Maxwell that could reach an astonishing
top speed of 40 mph. There being a dearth of auto mechanics en route, Alice herself changed the tires multiple times and made many other mechanical repairs en route.

It was not long before the motor-car became the transport method of choice of course – opening up a whole new range of picnic possibilities for lucky owners. Any invention brings in its wake a cascade of sub-inventions – some of you may have a ‘sock’ for your i-Phone, perhaps? The motor-car was no exception. The magazine
Popular Mechanics, of June 1917 described a new, very desirable accessory:

“An automobile lunchbox, designed and manufactured in Portland, Ore., is designed to be carried on the running board of a car, to which it may be attached by means of two small thumbscrews while traveling. It is shaped like a suitcase. One side lets down to form a picnic table, and the box contains a series of hinged and swinging drawers for food and bottles, also a metal-lined ice box with water drain, and a plate and linen compartment.”

Sadly for those of us more interested in what Alice, rather than the car, might have consumed en route across the country, there seems to be very little information. In her honour therefore, I give you a selection of travel-inspired ideas quite suitable for your next motoring excursion, from Sandwiches, by Sarah Tyson Heston Rorer, pubished in 1912.


East Indian Lentil Sandwiches.
Take any leftover boiled or stewed lentils, and press them through a sieve. To each half cupful of this mixture add a half cupful of chopped pecans, a level teaspoonful of curry and a saltspoonful of salt. Spread thin slices of brown bread with butter, then put over a thick layer of this mixture and cover with chopped parsley. Cover with another layer of brown bread, press together, trim the crusts and cut into fingers.

German Sandwiches
Put an pound of Swiss cheese through the meat grinder; add to it the yolks of two eggs, four tablespoonfuls of olive oil, a dash of cayenne and half a teaspoonful of sat. Rub until you have a perfectly smooth paste. Put this mixture between layers of buttered rye bread and serve. Do not trim the crusts nor cut.

Filipino Sandwiches.
Add one grated pineapple to a tumbler of peanut butter, mix thoroughly, add a tablespoonful of lemon juice, a dash of cayenne, a half teaspoonful of paprika. Put this between thin slices of brown bread, buttered; press together and cut into halves.


Turkish Sandwiches.
Chop sufficient cold roasted mutton to make a pint; add two solid tomatoes from a can of tomatoes, or two fresh tomatoes, peeled, the seeds pressed out and the flesh chopped fine. Add half a cupful of piñons or pine nuts, and sufficient olive oil to bind the whole together. Spread this between thin, warm milk or beaten biscuits and serve for afternoon tea or supper.

A month before the season, I don’t order fries with my club sandwich.
Mario Lemeiux
Posted by The Old Foodie at 5:56 AM

Filipino sandwiches? I've never seen that kind of sandwich filling in any Filipino cookbook. And I've read plenty, including turn of the century ones.

Hello Doddie - I think the interesting thing here is that this is an American concept of "Filipino" sandwiches - some of the others are equally un-authentic. It is interesting to see how other countries interpret a "foreign" cuisine, isnt it? Every turn of the century English cookbook has "Indian curry" which amounts to anything mixed with generic curry powder.