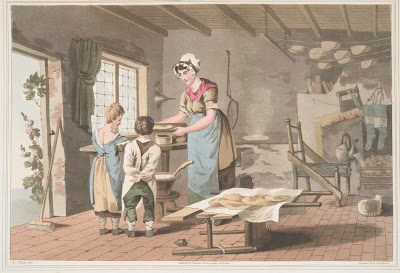 Celia Fiennes (1662-1741; reputedly an ancestor of actor Ralph Fiennes) did an amazing thing for a seventeenth century Englishwoman – she made extensive journeys around the country on horseback (riding side-saddle, of course), and alone (two servant women didn’t count in those days). Luckily for us she kept extensive notes of her adventures - and especially luckily for those of us interested in food, she often commented on and described regional foods that now seem to have been lost.

During her journey northwards in 1698, she described ‘Clap Bread’ as it was then made in Westmoreland. Clap bread is a sort of oatmeal (or sometimes barley) cake so called because it is clapped or beaten until it is thin, and then baked on an iron griddle. Her diary entry serves as the recipe for today.

“Here it was I saw ye oat Clap bread made. They mix their flour with water, so soft as to rowle it in their hands into a ball, and then they have a board made round and something hollow in the middle riseing by degrees all round to the Edge a little higher, but so little as one would take it to be only a board warp'd, this is to Cast out the Cake thinn and so they Clap it round and drive it to ye Edge in a Due proportion till drove as thinn as a paper and still they Clap it and drive it round, and then they have a plaite of iron same size wth their Clap board, and so shove off the Cake on it and so set it on Coales and bake it; when Enough on one side they slide it off and put the other side; if their iron plaite is smooth and they take Care their Coales or Embers are not too hot but just to make it Looke yellow, it will bake and be as Crisp and pleasant to Eate as any thing you Can imagine, but as we say of all sorts of bread there is a vast deal of difference in what is housewifely made and what is ill made, so this if its well mixed and Rowled up and but a little flour on the outside which will drye on and make it mealy is a very good sort of food. This is the sort of bread they use in all these Countrys, and in Scotland they breake into their milk or broth or Else sup that up and bite off their bread between while they spread butter on it and Eate it with their meate. They have no other Sort of bread unless at market towns and that is scarce to be had unless the market dayes, soe they make their Cake and Eate it presently, for its not so good if 2 or 3 dayes old. It made me reflect on the description made in Scripture of this Kneeding Cakes and bakeing them on the hearth whenever they had Company Come to their houses, and I Cannot but thinke it was after this manner they made their bread in ye old tymes Especially those Eastern Countryes where their bread might be soone dry'd and spoil'd.”

I have eaten your bread and salt. I have drunk your water and wine. The deaths ye died I have watched beside; And the lives ye led were mine.
Rudyard Kipling (1865-1936)
Posted by The Old Foodie at 5:56 AM

So "clap bread" is a of the family of beaten flat breads; a Georgian tortilla of sorts.
Whew, I'm glad that's cleared up!
The name was suggesting something contracted by hungry sailors on shore leave.

I have Fiennes book...somewhere. Now you've made me want to go dig it out.

Bob - my first thought was that it was so good you clapped when they came to the table .....
Shay. I love her journals - they add up to an amazing travelogue. There is an online version somewhere too.

I wish that oat cakes were more in fashion - I purchased some very fresh oats recently, and could only find some quick breads that used oats. Maybe I should try to adapt the Clap Bread for the modern kitchen ...

T.W - I think you would be providing a good service to mankind if you did this. they would be great with cheese.

Dear Janet,
I have just recommended your Pie book at my site Cozinha da Marcia, in Portuguese.
http://cozinhadamarcia.uol.com.br/artigos/pag_art_89_con.html