A menu of sorts.


In the early nineteenth century a bill of fare was not just a list of dishes in the order they were to be served, because, to put it simply, they were not served in sequential order. Our ‘modern’ method of serving a meal in that way is attributed to a Russian influence – hence its name, service à la russe. As the nineteenth century progressed service à la russe gradually took over. By the 1860’s, Mrs Beeton felt obliged to include suggested bills of fare in both styles. By the end of the century the old method - service à la française’- was dead.

In service à la russe there were two courses (small sweet treats such as fruit and nuts etc might be served after the meal proper – this ‘course’ became our dessert.) All of the dishes for the first course were placed on the table with absolute symmetry both horizontally and vertically, before the guests took their seats. Of course, this meant that the food must have been almost cold before the guests got to it, but presentation was all. There was no demarcation between savoury and sweet dishes, and both appeared on the table in each course. When the first course was finished, all of the plates etc were removed and the table completely re-set with the second course dishes. A few dishes that were expected to be finished first, such as soup and fish, were removed during the course, and replaced with – more substantial dishes called ‘removes’

What this meant for cookbook writers was that suggested bills of fare had to include instructions for positioning of each dish on the table. The easiest way to do this was by providing a picture. One early menu book was A Complete System of Cookery (1816) by John Simpson, and he did just that. He had two dinner suggestions for today, June 13 – this is one of them. 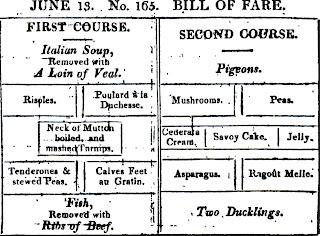 Simpson naturally included recipes for most of his suggested dishes. I have chosen a simple soup for today, suitable for the weather conditions whichever hemisphere you live in.

Italian Soup.
Blanch as much Italian paste as is sufficient for a tureen of soup, let it lie in water a few minutes, then put it into a small soup-pot with about two quarts of best stock. Let it boil gently for about half an hour; if for white, make a liason as before directed page 50. [i.e. four yolks of eggs, a little flour, and a pint of good cream that has been boiled: beat the eggs and flour well up, then put the cream, and strain it through a hair sieve, and put two or three spoonfuls of beshemell to it.]

‘Italian paste’ is of course, pasta.

I wondered what other ‘Italian’ dishes Simpson might have included in his book, and what qualified a dish as uniquely ‘Italian’.

He has Italian sauce, white – made from light stock, truffles, shalots, and ham, cream, and a few drops of garlic vinegar and lemon juice, and Italian sauce, brown – made from stock, mushrooms, shalots, Madeira, Seville orange juice and a little sugar. He also has Italian sallad , which is essentially slices of cold chicken, with chopped aspic in the ‘sauce’, the salad being ‘finished as Dutch sallad’, which seems like a strange way to finish an Italian Salad. The Dutch salad ‘finish’ is ‘garnished with flowers cut from radishes and beetroot, any way your fancy directs.’

Note: there is not a tomato in the whole ‘Italian’ selection in the book. That seems very strange today – but tomatoes were still viewed with a little suspicion in some parts of the Old World, in spite of over three hundred years of exposure.