Portrait of a Gardener.

The register of deaths at the Magistro della Sanita of Milan records that the painter Guiseppe Arcimboldo died on this day in 1593, at about 66 year of age, from kidney stones. Arcimboldo is best known for his much-imitated ‘portraits’ made from carefully assemble fruits, flowers, vegetables, and other foods. It is possible that his idea of creating pictures in this way was inspired by dishes at actual banquets held by various artists of his time, who made compositions out of real food.

The paintings are surreal, before there was an official Surrealist movement, and are full of allegory and symbolism which is lost to many of us today (I include myself here), but which would have been clear to his patrons and contemporaries. They are also clever and fun, and we can all appreciate that. My favourite is “The Vegetable Gardener”. Or should it be “The Vegetable Bowl”? 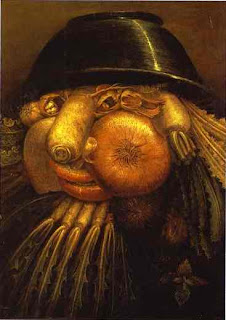 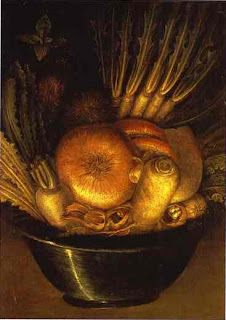 Paintings sometimes give us good information about food and dining in previous times. It is easy to identify the carrots and onions in this picture, and is that the long stalks of cardoons on the right (or the left, depending on which image you are looking at)? Garlic for the eyes too. Can you see anything else?

The carrot is our vegetable of choice today. Carrots have been around since ancient, perhaps prehistoric times – but it seems that they may have originally been used for their seeds and leaves. It was probably the Arabs who introduced them from into the and sometime between the 8th and 10th centuries, from whence they gradually spread to the and by the fifteenth century. These were different from the carrots we know today - they were purple or yellow, with thinner roots, and likely not as tender or sweet. It was the Dutch who bred the classical orange carrot in the sixteenth centuries, some say as an act of patriotic horticulture in honour of the Dutch Royal Family, the House of Orange.

The carrot belongs to the vegetable family Umbellifereae, and, as the name suggests, they have umbrella-like flower heads. There are over 3000 members of the family, including many herbs (parsley, dill, coriander, fennel and caraway) as well as celery and angelica. The carrot’s most obvious relative is the parsnip, which looks very similar and cooks very similar.

Here are some words and, and recipes of sorts, for both the carrot and the parsnip from the fifteenth century Italian Bartolomeo Sacchi (a.k.a Platina). He considers them simply variations of the same medicinally useful vegetable.

On the Carrot and Parsnip.
There are two kinds of parsnip … Doctors say that the parnsip is white while the carrot is red or almost black. … Both are difficult to digest and of little and harsh nourishment. The parsnip should be boiled twice, with the first water thrown away, and cooked with lettuce the second time. Transferred from there to a dish and seasoned with salt, vinegar, coriander, and pepper, it is suitable to eat, for it settles cough, pleurisy, and dropsy, and arouses passion. It is even customary for it to be rolled in meal and fried in oil and fat when it has been hollowed out after the first boiling.
Carrot is seasoned in the same way as parsnip, but it is considered sweeter if cooked under warm ash and coals. When it is taken out, it should cool a little, be peeled, scraped entirely free of ash, cut up in bits and transferredin to a dish. Salt should be added, oil and vinegar sprinkled on, some condensed must or must added, and sweet spices sprinkled over. There is nothing more pleasant to eat than this. It is good for people in two respects, for it represses bile and moves the urine. In other ways it is harmful, as it is for liver, stomach, and spleen.
[On Right Pleasure and Good Health; Platina (1475), from the Milham translation]

Some guy invented Vitamin A out of a carrot. I'll bet he can't invent a good meal out of one. Will .

Jane Grigson thought highly of a curried parsnip soup recipe that appears in a couple of her books. I was a bit disappointed - too great expectations, maybe - but have used the principle as the basis of a v. successful (to me and to others) puréed curried parsnip recipe. Simple enough, tho' undeniably high in dairy fats.

Boil parsnips (topped and tailed; peeling a matter of preference unless parsnips large & woody) til tender. Mash. Add butter, to taste, having previously simmered the butter for 10 minutes or more with a dessertspoon or two (again to taste)of added curry powder. Stir curry & butter occasionally as it simmers. Beat curried butter into mashed parsnips. Add salt, black pepper, nutmeg, if desired, and whipping cream, all to taste. Beat thoroughly. May be served as is, or puréed with a hand-blender (I blend). May be served immediately or set aside as other dishes are prepared, kept warm, and served later - keeps well.

A recipe regularly enjoyed on holidays (xmas, thanksgiving) by me and by many friends.

The recipes sound rather as though the writer didn't really like either parsnips or carrots -- or wouldn't know whether he liked them or not, after so much cooking and seasoning. However, the roasted, chopped carrot dish sounds intriguing. But also given the problems of a few years back with outbreaks of botulism poisoning from improperly refrigerated carrot juice, it probably wasn't unreasonable to think that cooking the heck out of everything was your best option.

Hello Cynthia; there were certainly times in history when veges (especially raw) were viewed with great suspicion - hardly surprising as they were often irrigated and washed with water that was not pure. I'd guess that root veges were often thought of as poor folk's food too.