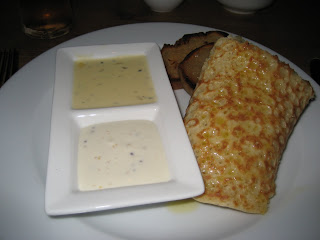 I had the opportunity to sample three different forms of ‘boxty’ (or boxtie) in Dublin last night. Foolishly, I had ordered Irish Stew to follow. Boxty is an Irish potato cake, and there are numerous regional variations – boiled, baked, fried, and with (or without) various additional ingredients. My sample platter at Gallagher’s Boxty House was listed as an appetiser and was a modern version of the concept as it was served with two sauces for dipping – blue cheese and honey-whisky.

Boxty is perfectly explained in an edition of The Dublin University Magazine of 1854.

"In the formation of potato starch the fibrous portion of the tuber, when separated and squeezed from the watery part, was mixed with coarse flour or oatmeal, and by the addition of a little kitchen stuff [i.e fat rendered from meat]or butter formed into a cake popularly known in the vest as boxtie, and in the south denominated “buck bread”, “Scotchy”, or “stampy”. This was so much admired, that the children in country parts used to make a grater out of the side of an old tin can, by punching it with an awl in order to rasp lumpers for a feast of boxtie. If we have reserved to the last, the potato-cake, made by bruising with the bottom of a tin porringer, two cold well-boiled potatoes, and mixing therewith a pound of the finest flour, the yolk of a fresh egg, a print of butter, and a sup of new-milk, the whole being well kneaded then pounded with a rolling pin, made into a cake five eighths of an inch thick, cut into squares and diamonds, baked on a griddle, and when properly browned and mottled, each piece torn asunder like a muffin, and a bit of butter slipt in to melt in the interior, and then eaten at tea or breakfast but particularly at the former, it is because it was the most widely disseminated, and universally admired form of potato-eating known to all tea-drinkers and cup-tossers from Cape Clear to the Causeway."


So then, boxty can be a griddle cake (or scone), a fried potatoe cake, a type of boiled (or baked) potato ‘pudding’ (for want of a better word), or something nearer a pancake. It can be made with grated raw potato or mashed up cooked potato. It can be sole food or soul food or far too solid an appetiser.


And, as an added bonus for our consideration, in the short description given above, we have two interesting word usages – ‘lumper’, for potato, and ‘a print’ of butter, meaning a single moulded block.


Boxty on the griddle
Boxty in the pan
If you don't eat boxty
You'll never get your man.
Traditional Song.
Posted by The Old Foodie at 5:24 AM

"Lumpers" was the name of the most popular type of potato variety in Ireland. Unfortunately it was very susceptible to blight and this and its widespread popularity is believed to have contributed significantly to the famine.

As an eating variety it wasn't considered great but it made a great bulk which was useful for feeding huge families and the gentleman who paid the rent.

just curious. are BANGERS AND MASH an English or Irish dish? Any body know?

A better word than "pudding" is dumpling.

BANGERS AND MASH is English. The term "bangers" coming from sausages made during the WWII blitz which contained so much water(instead of meat) that they often exploded when fried.

I must look into when the word bangers was first used. Another post, perhaps?