The Magazine of Taste.

The wonderfully eccentric Dr. William Kitchener (1775-1827), author of the best-selling The Cook’s Oracle (1817) was an unusual host for the time. He actually did the cooking for his guests, or at least had a substantial hand in the cooking. He was also an absolute stickler for punctuality on the part of dinner guests to the extent that the door was locked and late guests not admitted after the appointed hour. On this day in 1826, he wrote to one of his regular guests, William Brockedon.

My dear Sir,
The Honor of Your Company is requested to dine with The Committee of Taste, on Monday May 22nd.
The Specimens will be placed upon the table at o’ Clock precisely, when the Business of the Day will immediately commence.

I have the Honor to be,

The full frontispiece blurb of his book gives an indication of the man, methinks – although the transcribed version does not give the same impression as the riot of fonts in the real thing:

APICIUS REDIVIVUS;
OR,
THE COOK'S ORACLE:
Wherein especially
THE ART OF COMPOSING SOUPS, SAUCES, AND FLAVOURING ESSENCES
IS MADE SO CLEAR AND EASY, BY THE QUANTITY OF EACH
ARTICLE BEING ACCURATELY STATED BY WEIGHT AND
MEASURE, THAT EVERY ONE MAY SOON LEARN
TO DRESS A DINNER, AS WELL AS THE
MOST EXPERIENCED COOK;
Being Six Hundred Receipts,

THE
RESULT OF ACTUAL EXPERIMENTS
INSTITUTED IN
THE KITCHEN OF A PHYSICIAN,
FOR THE PURPOSE OF COMPOSING
A CULINARY CODE FOR THE RATIONAL EPICURE,
AND AUGMENTING
The Alimentary Enjoyments of Private Families;

I have taken as much pains in describing, in the fullest manner, how to make, in the easiest, most agreeable, and most economical way, those Dishes which daily contribute to the comforts of the middle rank of Society, as I have in directing the preparation of those piquante and elaborate relishes, the most ingenious and accomplished “Officers of the Mouth” have invented for the amusement of Grands
Gourmands. These are so composed, as to be as agreeable and useful to the stomach, as they are inviting to the appetite; nourishing without beiug inflammatory, and savoury without being surfeiting.

Dr. Kitchener was as much a stickler for accuracy and organisation in the kitchen as he was about punctuality for guests. He was, as his frontispiece suggests, keen on ‘essences’ and pre-prepared powders, and invented the Magazine of Taste to keep them handy for use. He described it as a “Mahogany sauce box, with four eight ounce bottles, sixteen four ounce bottles, and eight two ounce bottles” and gave a diagram to show the position of the contents. 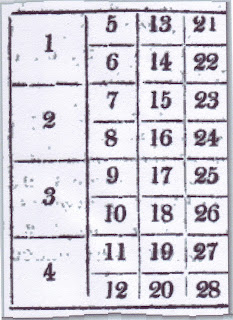 The recommended contents (for most of which he gives recipes) were:

There was no agonising over which one of these to give you. One does not normally see ‘pudding’ immediately followed by the word ‘catsup’. An excellent idea to keep on hand nonetheless, in case you have a pudding emergency.

Pudding Catsup.
Half a pint of brandy, a pint of sherry, An ounce of mace, And half an ounce of cloves.
Let them steep for fourteen days, and then strain it, and add half a pint of capillaire*. This will keep for years, and added to melted butter, is a most delicious relish to puddings, and many sweet dishes.

*A syrup or infusion of maidenhair fern or one flavoured with orange-flower water, and to be explored more fully tomorrow.

Wow Wow Sauce
To Preserve Ginger.
Chili, or Wine, and Essence of Allspice for Mulling of Wine.
Mock Arrack and Mock Mock Turtle Soup.
Twelfth Cake
Restoring the Cooks Palate
The Dangers of Devils (from the Companion site)

Blessed be he that invented the pudding - to come in pudding time is to come to the most lucky moment in the world. Francois Misson, French visitor to in 1698.

Harold McGee, eat your heart out! There are some days I could really used a Cook's Oracle!

That pudding catsup is really not a bad idea!

Dr. Kitchener sounds quite good fun to visit, I would think. I wonder who washed up after he didall that cooking - did he? That would really impress me!

Wouldn't you love to know what will be said in the year 2208 about our current magazines/blogs and ingredients! We are so reasonable and modern to ourselves.

hello evryone:
t.w. I love this idea of a mahogany box of flavours.
Lidian - I agree - the pudding catsup might be worth a try.
Rosemary - I often wonder the same thing - we will no doubt be just as quaint and amusing!

I have a basket of taste that my gran put together for me with all sorts of home made sauces and spice mixes in. I wouldn't think of cooking without it and am very surprised over the similarities between the flavour magazine and my basket.