I have another Christmas menu for you today, folks. It is from a marvelous source which I have used before: Host and guest: a book about dinners, wines, and desserts (1864), by Andrew Valentine Kirwan. The author gives the menus for quite a large number of celebrity dinners of the nineteenth century, and amongst them is one attended by the French king Louis XVIII in England, where he spent some time in exile during the rule of Napoleon Bonaparte.

As we have discussed many times, dinners at the time were served in two or three ‘courses’, all dishes for each course being put on the table at one time, all to be replaced for the next course. The arrangement of the dishes on the table was subject to strict hierarchical rules, and a bill of fare was not merely a list of dishes, but required a picture too, so that Mistress and staff might know where, exactly, to place each platter, bowl, or ornament.

The author of the book briefly explains the event before showing the layout of the table.

‘At the Christmas dinner of the Duke of Buckingham, in 1808, Louis XVIII was present, and the following was the bill of fare, as prepared by Mr. Simpson, the duke’s cook. It is undoubtedly more substantial than elegant.’ 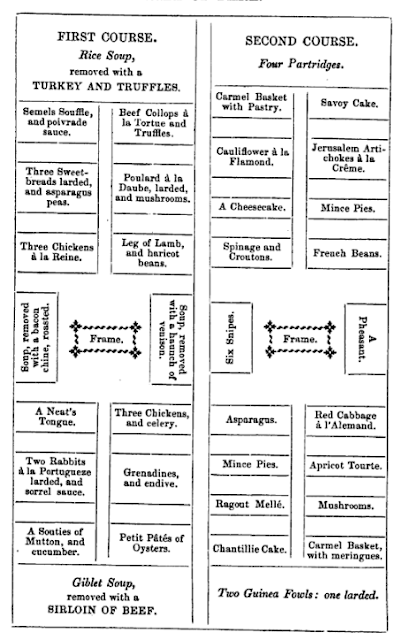 It looks like a pretty elegant spread to me!

I thought we might go for a vegetable dish today, so here are some instructions from another book of the era, on preparing red cabbage.

Choux Rouge.
Red Cabbages.
They are mostly stewed to eat with ham, bacon or smoked sausages; though sometimes without any meat: they are very strong eating, and should be first scalded, then stewed with butte, pepper, salt, and cloves; and vinegar to be added to it just before serving: they are reckoned most wholesome in veal broth for consumptions; but are most suitable for pickling, as girkins, &c., &c.
The professed cook; or, The modern art of cookery, pastry, & confectionary ... (1812), by B. Clermont.

Possibly to the point about "elegance" - Olivier Bernier, in his book Pleasure and Privilege, discussed a menu of Louis XVI, the elder brother of Louis XVIII:

"It is interesting to note that a serious eater like Louis XVI would have none of the nouvelle cuisine; any one of those dishes could have been served on a middle-class table. A number of items were quite expensive - suckling pig, hare, partridge, pheasant, Westphalian ham - but all would have been immediately rejected by anyone with a sense of fashion."

Possibly something of the same principle is at work in your author's book. However, I can't tell whether the dinner is not considered "elegant" by the standards of the time when it was actually served, or by the standards of 1864. Many of the items seem on the substantial side, though, and that might undercut claims to "elegance."

Insightful comments, Foose. Thankyou. I read a slightly snobbish tone in the author, so perhaps the meal was not "elegantly fahionable " enough for his own era ?

Well, Bernier's book comes from the mid-1980s - I don't think he was drawing a parallel between his own era and that of the 1780s. Rather, he was seeking to explain the details of life in Ancien-Regime France after "fashion" became an obsession with a small coterie of aristocrats under the aegis of Marie-Antoinette.

Apparently, the nouvelle cuisine of the era was the "essences," or restauratifs served at the newly emerging restaurants. They were boiled-down elixirs of meat and vegetables, sounding dreadful to us, but tremendously popular to the fashionable set craving novelty and refinement. Louis XVI, being an old-fashioned type of king, insisted on sitting down to a traditional royal dinner - much to the amusement of the fashionable elite, who recognized that his heavy, solid preferences in food were also popular with the affluent middle class.

Thanks, Foose, and another apology from me for the late response. You always give me something to think on, so thankyou.