You asked for insects! 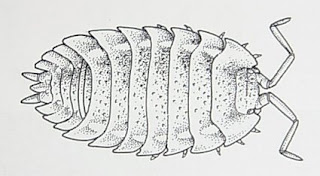 My post last week about ‘cricket’ precipitated a few comments about insect-eating, so you only have yourselves to blame for the unpleasant truths that are about to come your way.

For a start, whether you like the idea or not, you eat insects. About a pound a year, at least, if the information provided in the (now, sadly, defunct) Food Insects Newsletter is correct. You eat them inadvertently in flour, jam, peanut butter, canned fruit, frozen vegetables – in just about everything, really. They are so tiny, or are ground up so tiny, that you don’t notice they are there. I don’t know what sort of position this puts you in if you are a vegetarian, but there it is. Food regulatory authorities around the world have ‘actionable levels’ for bits of insects and other ‘filth’ in food – for example, in the USA, for peanut butter, the actionable level of ‘insect filth’ is an average of 30 or more insect fragments per 100 grams (there is an allowable amount of ‘rodent filth’ too, but that can wait for another time). So, what that means is 39 insect fragments in your PB is a mere ‘natural defect’.

There are a few things you can do, if you are disgusted. One is to stop eating altogether. There is no other way to avoid eating insects. Another is to increase pesticide use – it might reduce but it wont completely obviate insect consumption – and it would hardly be politically correct to suggest that, now would it?

The other way is to embrace the concept wholeheartedly. Twenty percent of the world’s population eat some sort of insects voluntarily – not just as a survival mechanism, but with positive relish. Insects actually increase the nutritional value of many foods, and provide a great source of protein around the world. There has been renewed interest in recent times in this ‘micro-livestock’ which is capable of being reared by small producers – great news for locavores, perhaps?

A pioneer and staunch early promoter of entomophagy was a nineteenth century clergyman called Vincent Holt. His book Why not eat insects ? was published in 1885, and is still a classic. He points out several advantages, including these interesting ‘non-nutrition’ ideas:

“There cannot be said to be any really strong objection, among the upper classes, to making any new departure in the direction of foods, if it once becomes the fashion to do so”

“What a godsend to housekeepers to discover a new entrée to vary the monotony of the present round!”

Holt also gives some sample menus, to help get the idea across:


Snail Soup.
Fried Soles, with Woodlouse Sauce.
Curried Cockchafers
Fricassee of Chicken with Chrysalids.
Boiled Neck of Mutton with Wire-worm Sauce.
Ducklings, with Green Peas.
Cauliflowers garnished with Caterpillars
Moths on Toast.
Although there is not a recipe section as such in the book, there are a few scattered throughout the text. Here, to get you started on the above menu, is one of them.

Wood-Louse Sauce.
Wood-louse sauce is equal, if not distinctly superior to, shrimp.
The following is the recipe: Collect a quantity of the finest wood-lice to be found (no difficult task, as they swarm under the bark of every rotten tree), and drop them into boiling water, which will kill them instantly, but not turn them red, as might be expected. At the same time put into a saucepan a quarter of a pound of fresh butter, a teaspoonful of flour, a small glass of water, a little milk, some pepper and salt, and place it on the stove. As soon as the sauce is thick, take it off and put in the wood-lice. This is an excellent sauce for fish. Try it.

What a pleasant change from the labourer's unvarying meal of bread, lard, and bacon, or bread and lard without bacon, or bread without lard or bacon, would be a good dish of fried cockchafers or grasshoppers.
Vincent Holt (1885).
Posted by The Old Foodie at 5:48 AM

One of your best Janet. I'm cheering you on.

Thanks Evias - not cheering me on to eat woodlice, I hope!

I love the concept of micro-livestock! I can just imagine rounding up my herd and driving them to market, being very careful not to step on any of them along the way.

Yippe Ki Yi Yo
Get along little Buggsies!

Very, very stricly kosher people have significantly reduced levels of insects in their diet. There are regulations concerning which green leafies may be made insect free and how, and what's tolerable is way below the standards for other Western food.

On another note, jam probably loses most of its livestock with the clarification process. I know, this spoils a good story :).

I'm almost ashamed to admit to this. Many years ago I invited a lot of family members for Thanksgiving dinner. I planned to make a wild rice stuffing (or dressing). DH dutifully bought the real thing, which cost a fortune. As I rinsed, tiny bugs floated to the surface. What to do? It was the night before Thanksgiving, and you've gotta have stuffing...

After spending time trying to pick out or rinse out all the bugs, I gave up and cooked it, bugs and all. No one noticed, and to this day there are some family members who don't know about the bugs.

Valerie, we have all done it. It doesnt matter, really, 'cos even if you dont see them, they are there!