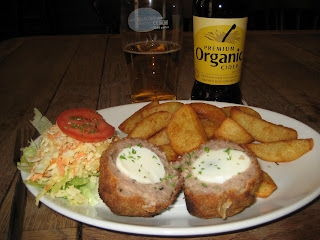 I spent a large part of today in on a fruitless search for Bath Chaps. An otherwise well bacon-stocked deli/butcher told me that he used to sell a lot, but I am the first person in five years to ask for it. Bath Chaps are obviously victims of the cholesterol police, damn them.
My fall-back position was the Scotch Eggs (with ‘thrice cooked chips’) at the Rummer, a pub just near Pulteney bridge. They advertise a number of sausage dishes made from the ‘Old Spot’ variety of pig. I have to say they were good – so do try them if you are in the area. I am embarrassed to admit that I was unable to finish the chips, but it was not for want of trying. There was a man-sized portion. It might also have had something to do with the 500ml of cider I had with the lunch – a local organic variety, very dry and not at all like alcoholic apple juice. When I finished I noticed that it was 6.5% alcohol, so I had had 3.3 standard drinks. For lunch.
I don’t know when Scotch Eggs became Scotch, but I will look into it. In the meanwhile, this recipe fits into the Georgian time-frame, just.
Scotch Eggs.
Boil hard five pullets' eggs, and without removing the white, cover completely with a fine relishing forcemeat, in which, let scraped ham, or chopped anchovy, bear a due proportion. Fry of a beautiful yellow brown, and serve with a good gravy in the dish.
A New System of Domestic Cookery, Maria Eliza Ketelby Rundell, 1824.
Posted by The Old Foodie at 4:11 AM

They look very good. Thank you.

They look good, but a bit like a lead balloon. No wonder you couldn't finish it...